Adriane de Souza works as a freelance photographer in Qatar and is originally from Brazil. As part of the GOALS program, Adriane tells her story of growing up in a football family and her project Qawiya, where she documents women in sports across Qatar. 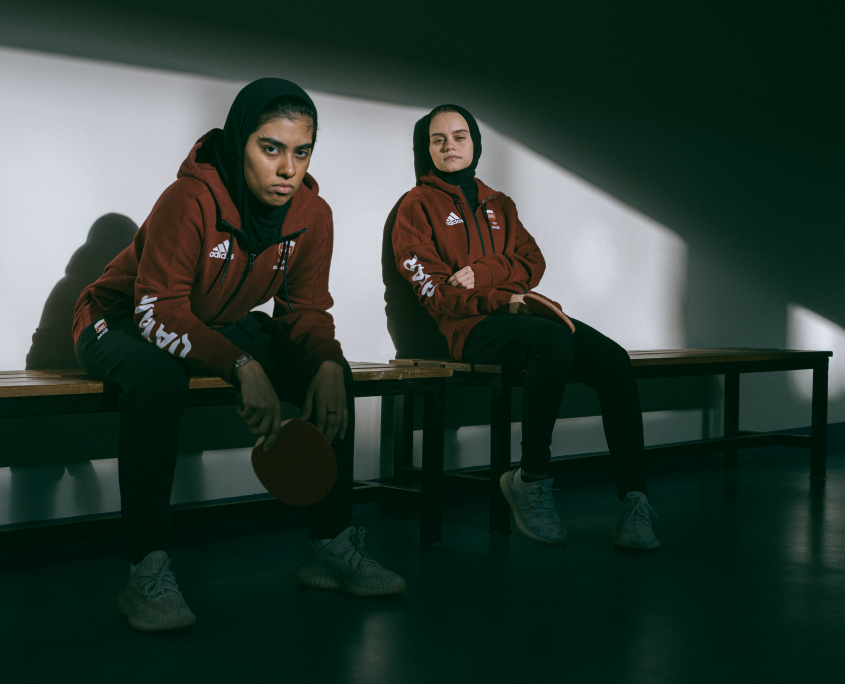 I love meeting people and sharing experiences. That is something beautiful that photography has brought to my life.

In 2020 after the first lockdown I started a personal photography project called Qawiya, where I document women in sports across Qatar.

I want to share their stories, so other girls or women can see themselves in them and find encouragement to pursue their dreams. 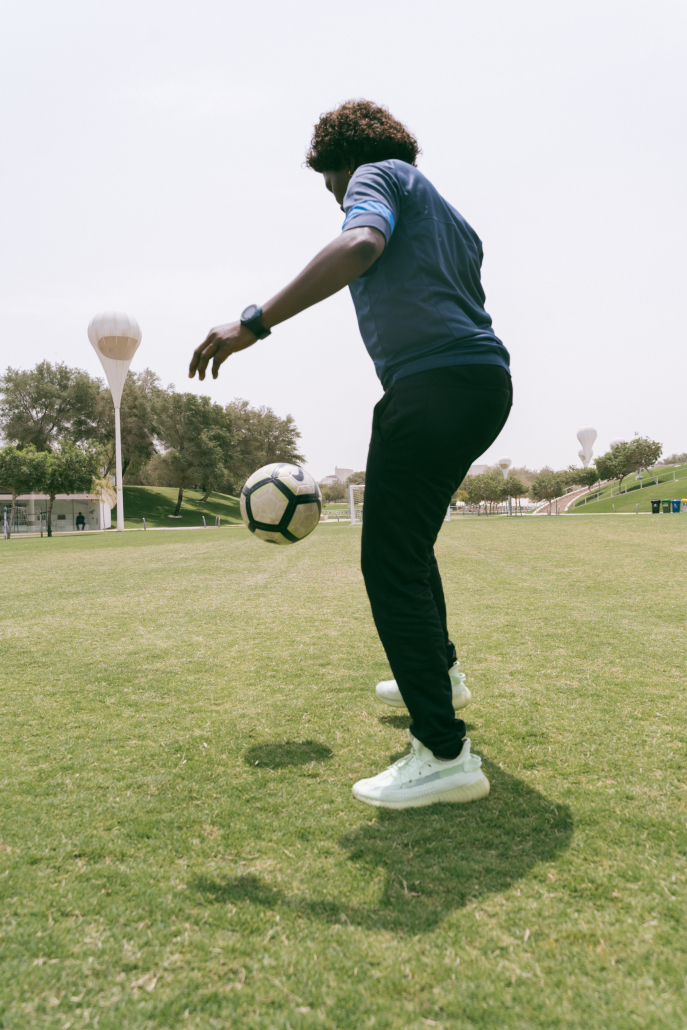 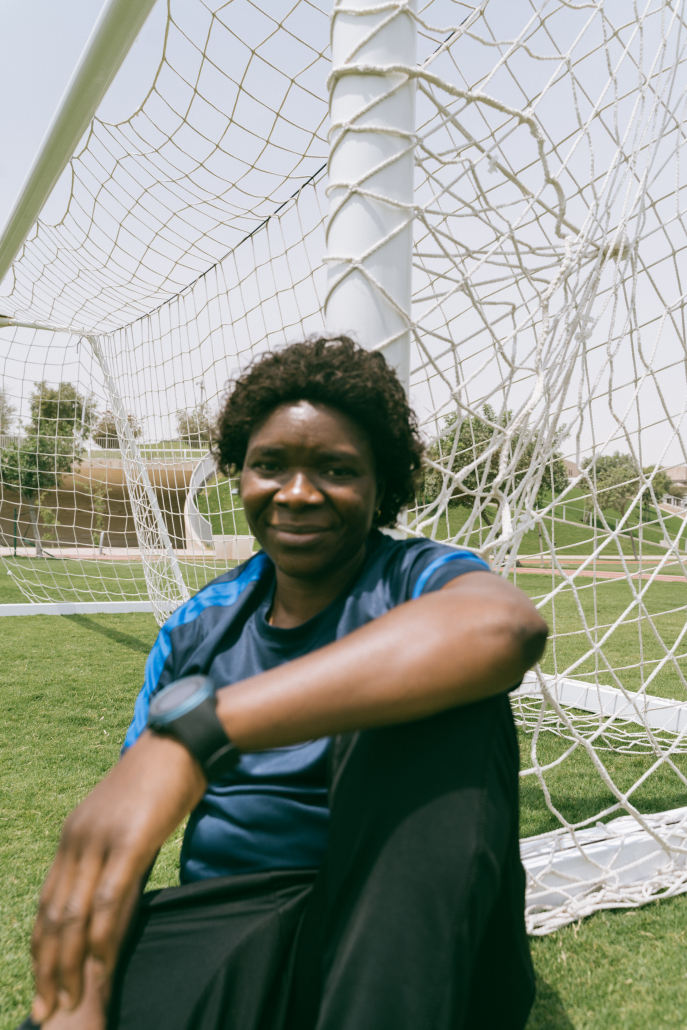 Since I was a young girl, I have noticed that sports do not have equal gender representation. I do not believe women are born less interested in sports, I believe that environment and representation matter. Qawiya is, in a way, a conversation with that girl who did not have women in sports to look up to.

Thanks to this project I get to meet so many women participating in sports in Qatar, with such amazing stories and backgrounds. Women who are dedicated and hard-working and have so much to share.

Women like Afaaf Alqorane, the first female boxer in Qatar, and Amal Mohed, the first female basketball referee in Qatar – who is so determined and willing to change how things work for women in sports. I have also documented Mubaraka Al Naimi, who is such a dedicated and disciplined tennis player.

All of these women are disciplined, determined, and organized, because some still go to school, university, or have jobs. They work really hard.

Yet, somehow there is still a belief that the outdoors is a place for men and not women. This is something that is changing but it will still take some time.

Qawiya is personal for me. It is a connection between my past, my present, and my future. It is a love letter to sports, to women, to my country (Brazil), and to my father. Hopefully, this project can become an inspiration for others, as it has for me. 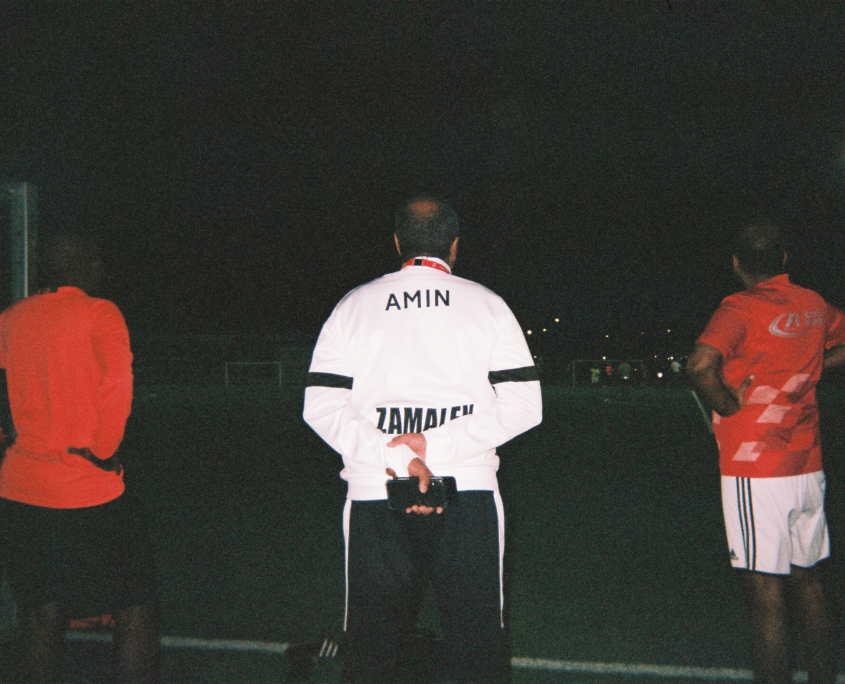 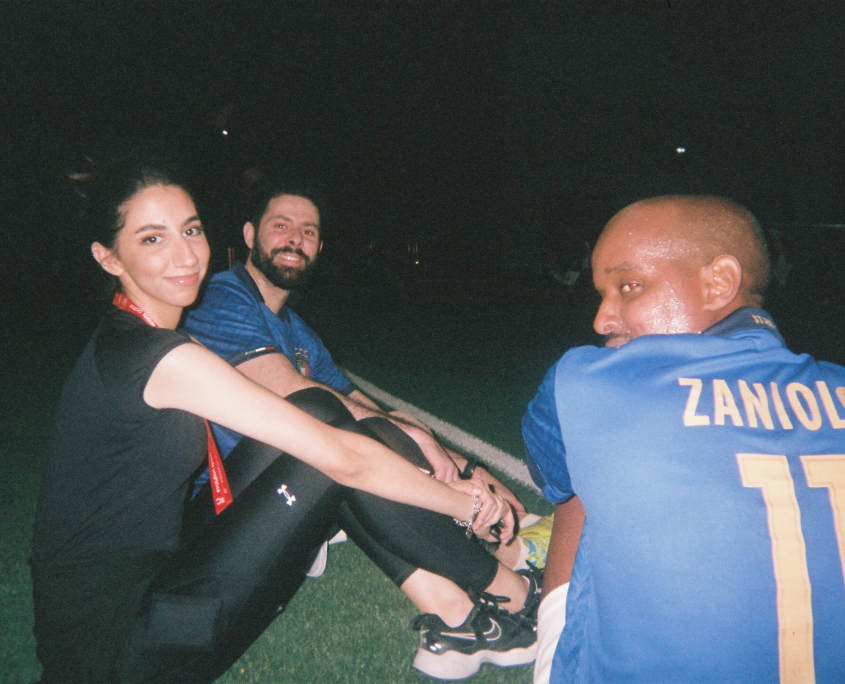 My father was a professional football player. I come from a family that loves football, which is somehow expected when you are from Brazil. Parents and grandparents try to convince the children to support their teams, it becomes a family tradition.

Sometimes, relatives cannot even explain how they started supporting the teams they did, but it is usually connected to who influenced them the most. My house was always full of guys who play football and live sports, but it took years for me to meet women who are truly passionate about it.

Due to my father’s work, we have always followed his career from country to country. When I was a kid, we moved to the Middle East and lived between Saudi Arabia and Qatar to follow his football career.

Growing up, there was always a lot of football talk in my house. My father has always wanted one of his kids to be a football player, but none of us became one! 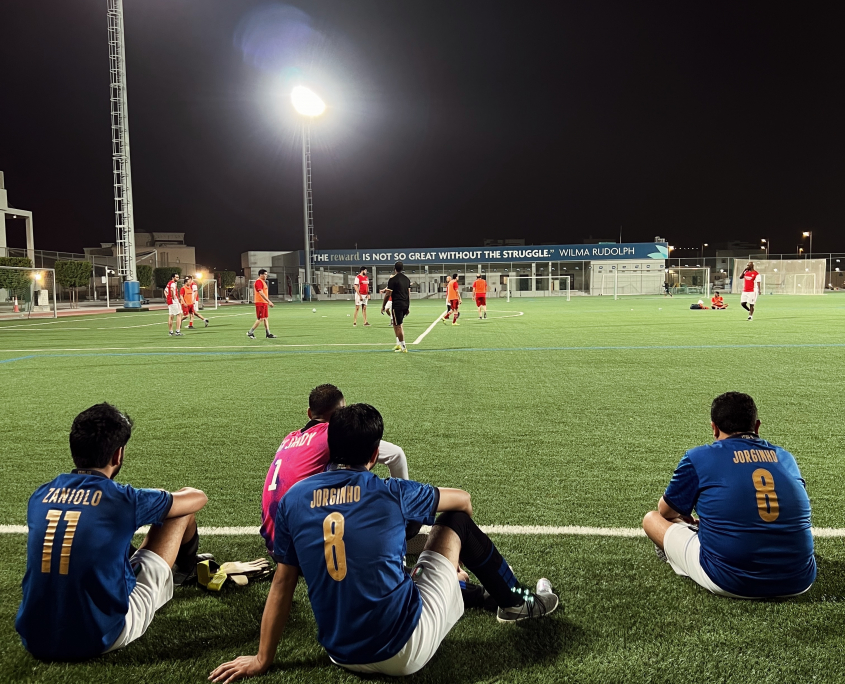 Processed with VSCO with j5 preset

I always loved sports, overcoming barriers, and pushing our limits. I was really into sports but was not interested in playing football. I have a love-hate relationship with football, probably because I am surrounded by people who are obsessed with it!

Some people are so passionate solely about football and they go to extremes. In Brazil and other countries, people fight each other and offend each other because of their team. In Brazil football was used as a tool of entertainment to divert attention from the political mess. Football can be complicated.

However, I appreciate from my family the legacy that football can have, a legacy of love and community over negativity. That is what I see in the women I am documenting with Qawiya. There are so many women and girls in this country with amazing stories and a passion for sports. 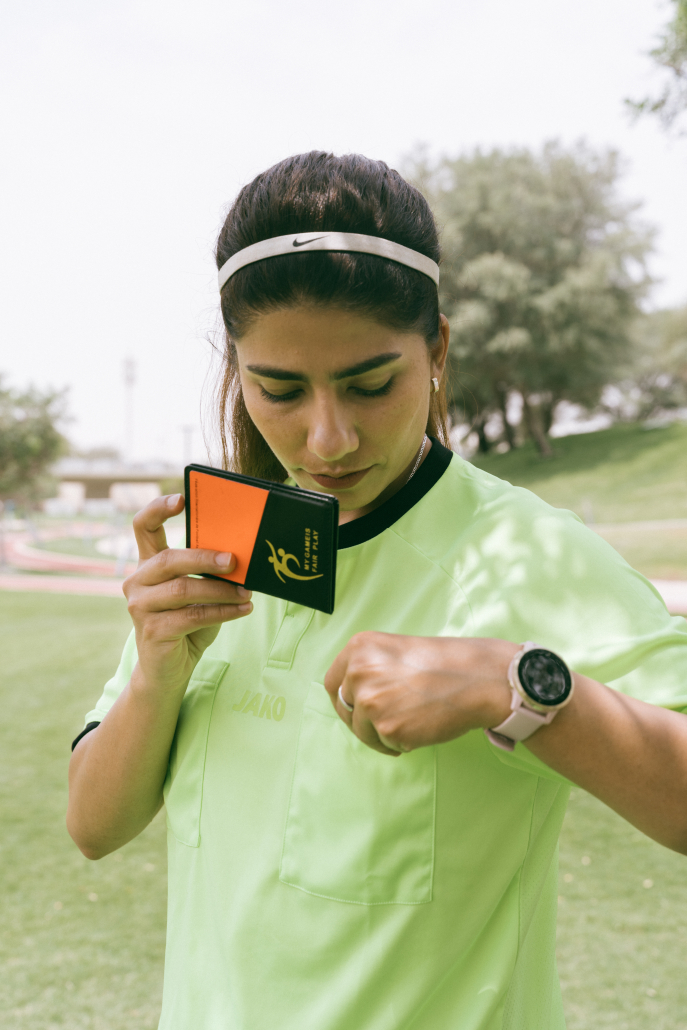 It is important to highlight these stories so girls and women can be inspired by them. Because representation is important. Sometimes we do not even think about pursuing something because our default thought is that it is not possible.

I want to create an exhibition space for these talents to be seen together. I hope it can impact others and give them a push towards their goals. 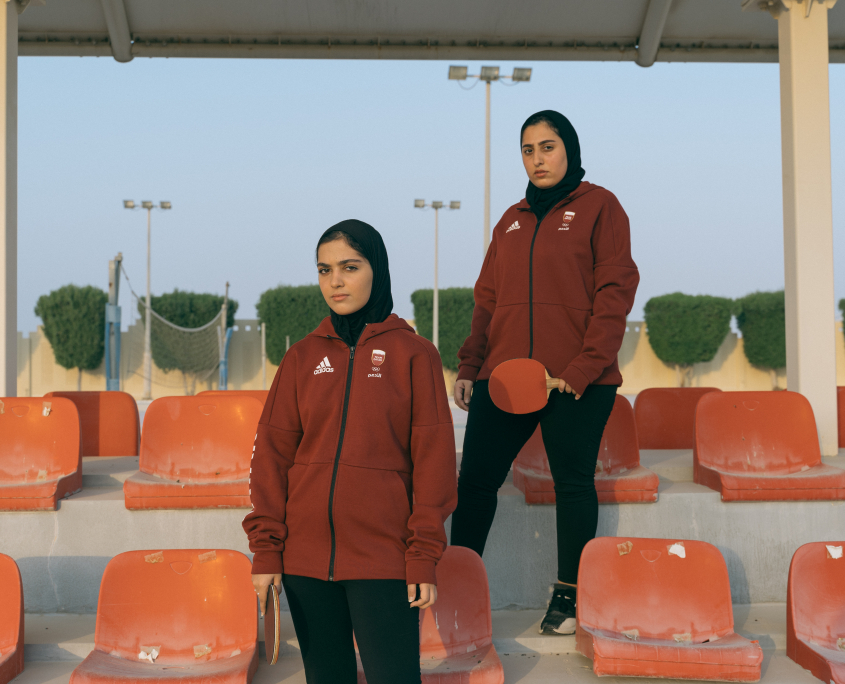 This is the perfect year for Qawiya as Qatar hosts the FIFA World Cup. My hope is that the World Cup will be a very positive experience of cultural exchange for everybody. We will welcome people from all over the world to a region that does not have as much tourism as other places. Instead of going to a country that has been completely explored, come to Qatar and learn about the country and its people.

Living here for many years, I am always asked the same questions about safety, or even if women have access to education. I think that exposure to the country and the people will help introduce people to the true Qatar. Hopefully this process teaches everyone to be more accepting and tolerant towards our differences.

I have heard so many things about Qatar that make absolutely no sense. The Arab world has often suffered through the negative impact that the media has caused. It has put everyone in a small suffocating box. I really hope people arrive here trying to find similarities instead of differences. I wish that the World Cup’s legacy is tolerance and a less stereotypical and fetishized view of the Arab world. 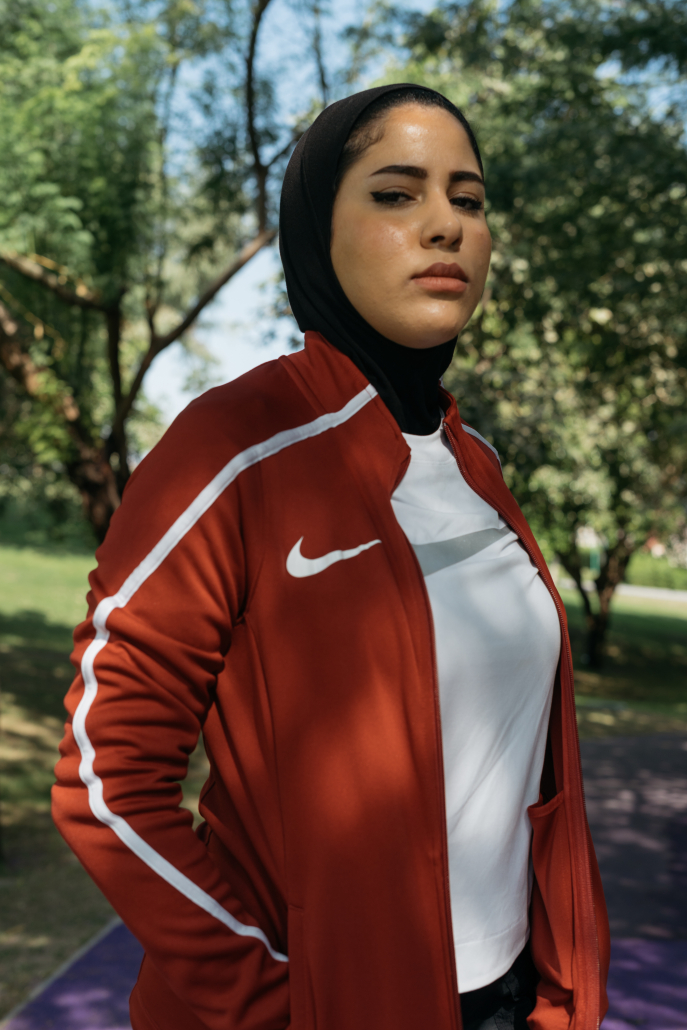