Arham Khalid is 19 years old, a Youth Advocate for Generation Amazing, and studying communications.
Originally from India and living in Doha, Arham shares her story, from challenges in football to social change through football.

*All photos featured in this article were taken by Arham Khalid 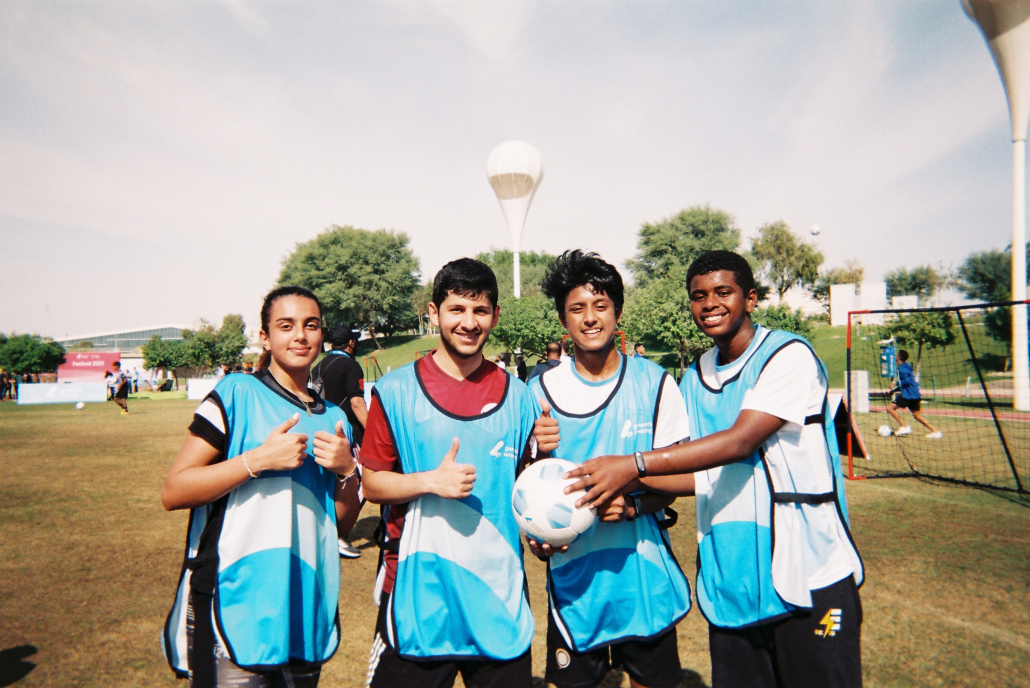 In 2016, I was a shy and timid 14-year-old girl when I was selected for a football competition on the day of the event.

I had not applied, did not have the uniform, and knew nothing about football. The only thing I was confident of was that I would make a fool of myself and that is exactly what happened. Within ten minutes I had twisted my ankle trying to defend and had to be substituted. I was embarrassed and furious.

Four years later I became a Youth Advocate for Generation Amazing delivering football workshops. This journey was not easy.

After my initial experience with football, I felt demotivated. It had negatively affected my self-confidence. At school, I thought people might make fun of me because of how ‘stupid’ the incident was, but no one even recalled it. My teacher didn’t even mention it; in fact, she said: “I was surprised to see that you lasted on the field for 10 minutes, especially for someone who did not even know how to play”.

At that point, I realized that it is the effort that matters most – what is important is that we tried. People rarely remember failures. This also motivated me to try playing football more and find out where I had gone wrong.

I tried my best to learn the sport, but I was not as good as my friends. Initially, I was disappointed.

However, around that time three years ago, I was diagnosed with scoliosis – a sideways curvature of the spine that hampers your flexibility. Everything started to make sense. Out of all the side effects, scoliosis makes it very hard for me to run, which of course is something very important in football.

The diagnosis was a major setback for me because I had just developed my interest in football.

But ever since I found out that this was the reason why I always faced problems while playing any sport, I decided to not run away from it. Instead, I try to use it as my strength to tackle obstacles. 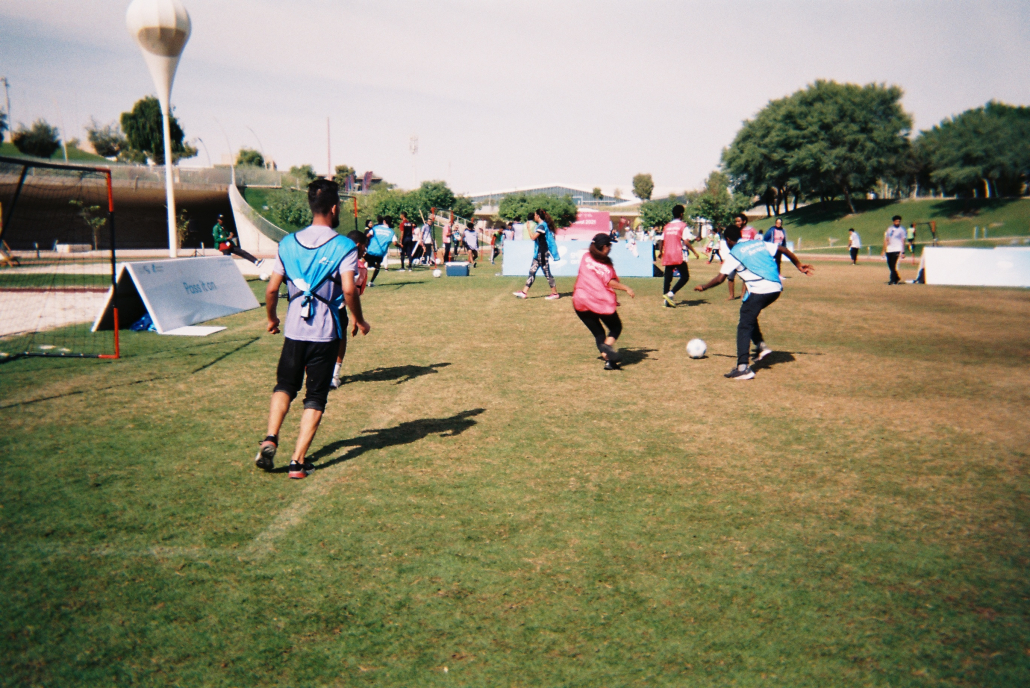 A few months later, I was introduced to the Generation Amazing Festival by THIMUN (The Hague International Model United Nations) Qatar.

I was really drawn towards the Festival because of its theme – gender equality – an issue I deeply care about. I enrolled for the Festival purely because of the theme. However, the Festival was a life-changing experience for me.

Not only did I connect with the theme but the Festival also showed me how sports, especially football, can be used as a tool for development. The mixed-gender games did not only tackle the issue of gender inequality but also helped people develop leadership skills and empathy.

The Festival exposed me to another side of football, something that I would have never imagined. In my birth country of India, football is not as popular as cricket, so I did not expect myself to relate to the sport (though hopefully we will one day see the Indian football team qualify to play at the World Cup).

However, it was the Festival that made me realize that I could still be connected to the sport and use it for the development of our society.

I applied for the Youth Advocate program and took part in workshops and trainings that taught me a lot about football.

In my journey with Generation Amazing, I have met many renowned footballers and had a chance to learn from their experiences. I also got an opportunity to deliver a small activation on the field during halftime of the Amir Cup finals in 2020.

The goal of our activation was to show the spectators ways in which they can play sports and stay active while maintaining social distancing norms.

This was an opportunity for me to step out of my comfort zone because delivering an activation on the field in front of thousands of people is not an easy task.

When I saw the field, the first thing I recalled was how terrible I played that first time at school. I had the same fearful thoughts again. “Will I mess it up again?” “What if I drop the ball?” “What if I cannot kick the ball properly?”.

On the field, I found out that we were playing with renowned footballers Samuel Eto’o and Tim Cahill. The pressure was real. When the activation started, I did exactly what I feared, I missed the balls multiple times. However, to my surprise, that did not deter me from continuing. In fact, I was even more determined to play better.

I was proud of myself for overcoming my fear, for giving my best, and for not focusing on my mistakes but enjoying and learning from the experience. 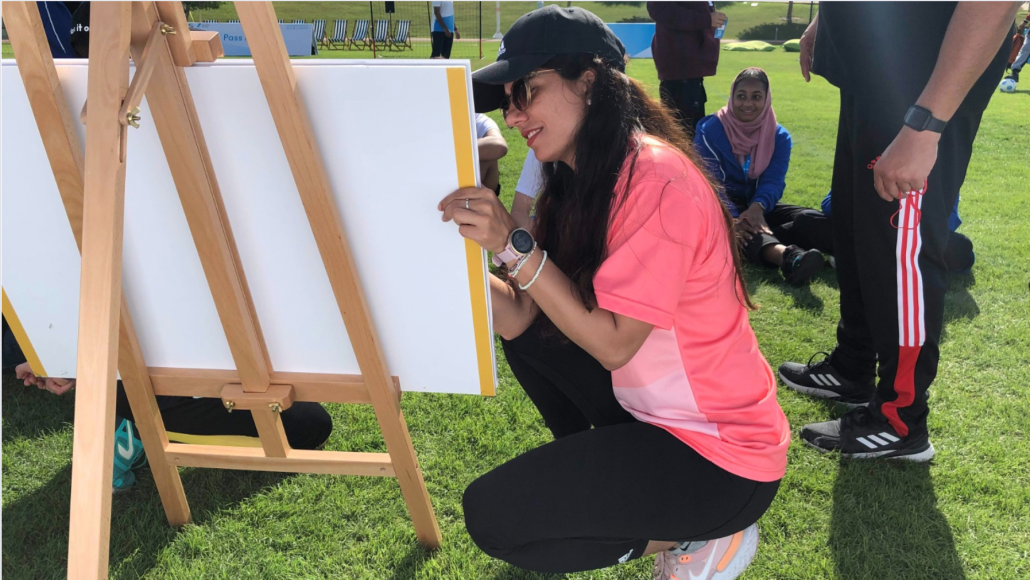 It might sound unreal, but these 18 months as an Advocate have made me a different person who is no longer shy or timid but is very vocal about her views and advocates for the right things.

I am very excited about the World Cup. Although I am not a huge “football fan”, I am certainly a fan of how the sport can be used to bring a change in the community. I cannot wait to see how the World Cup bridges the gap between all the communities around the world and makes a difference in our society.

I am really passionate about social activism and creating awareness about pressing issues. I have been a part of initiatives related to women empowerment, gender equality, and mental health. I have been an advocate and ambassador for Doha Debates, Future is Female, Generation Amazing, One Goal Arabia, and a mentor volunteer for WISE.

I want to keep on working towards driving change by making films that raise awareness about social issues in my community.

Today, I might still not be able to kick a football with great intensity. I might still trip while running with the ball. However, today, I have learned the skills required to use football to bring change in our community. And for me, that is a great win in life.

About the storyteller – Arham Khalid

Arham is a Youth Advocate at Generation Amazing and a Communications student at Northwestern University in Qatar. Her area of interest is storytelling and filmmaking. She moved to Qatar from India in 2011. After she was introduced to Generation Amazing in 2019 she became a Youth Advocate and is passionate about how football can be a tool for development and gender equality.